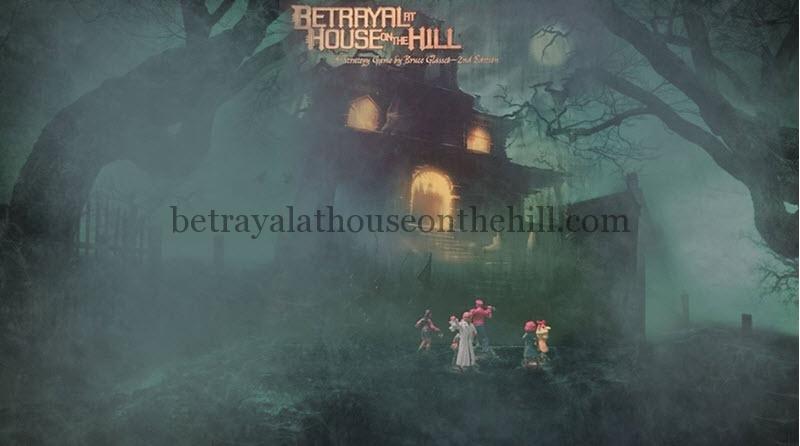 door: Doors connect rooms. You can move through a door if it connects to another door in an adjacent room. Doors inside the house are always open

front door: Unlike other doors, the front door (in the Entrance Hall) is always locked. You can’t leave the house on haunted hill or use the front door unless a haunt says otherwise.

explorer: Each player controls a character called an explorer. Explorers include the traitor and the heroes after the haunt begins.

false feature: Sometimes it’s not possible to match two doors or windows in adjacent rooms. When that happens, you instead create a false feature. You can’t move through false doors. False windows don’t
count as windows.

figure: Each character card has a matching plastic figure, corresponding to the color behind the portrait, to represent that explorer in the house on haunted hill.

haunt: An explorer triggers the haunt scenario on a successful haunt roll. A haunt describes how to win the game and includes new rules, including monsters. During the haunt, explorers can die. See “The Haunt.”

hero: After the haunt begins, all the explorers other than the traitor become heroes struggling to survive the perils of the house and the plans of the traitor.

traitor: After the haunt begins, one explorer becomes a traitor who turns on his or her former companions. A few of the haunts feature a hidden traitor whose identity is secret from all the other players (see “Haunts with a Hidden Traitor,” .

haunt roll: Before the haunt begins, you must make a haunt roll at the end of your turn whenever you discover a room with an omen symbol . Roll dice equal to the number of omen cards in play. If the result is lower than that number, the haunt begins.

haunt-specific action: Many haunts require explorers to take special actions, such as an exorcism roll or destroying an object. You can take a haunt-specific action and attack on your turn.
item: Explorers can carry and use item cards and many omen cards. Items can also be picked up, dropped, traded, or stolen. See “Use Item and Omen Cards” .

item token: Many haunts put one or more pentagonal item tokens in the house on haunted hill, which have special rules for their use Unless the haunt says otherwise, item tokens can be traded, dropped, picked up, or stolen just like item and omen cards.

weapon: The Axe, Blood Dagger, Revolver, and Sacrificer Dagger item cards, and the Spear omen card, are weapons. You can use a weapon only while making an attack, not while defending. (See “Make an Attack,”.) You can use only one weapon per attack, but you can carry
more than one. Using a weapon during an attack is optional.