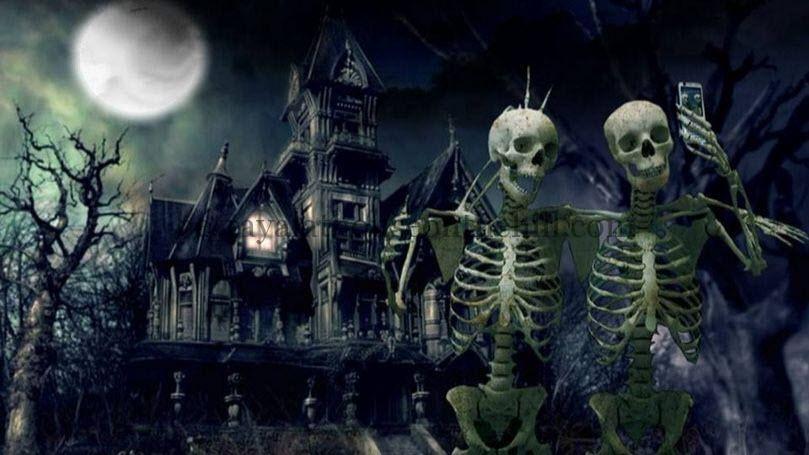 This is our haunted house games glossary – all our Board Game words are here!

adjacent: Rooms are adjacent if they share a side. Diagonal is never adjacent.

attack roll: You and your opponent both roll dice equal to your Might. Whoever gets the higher result inﬂicts physical damage against the loser equal to the difference (on a tie, no one gets hurt). See “Make an Attack,” page 13.

distance attack: Some weapons or special items in a haunt allow you to attack an opponent in another room within your line of sight (see that entry, page 22). You take no damage if your attack roll is less than the opponent’s.

card: There are three different types of cards in haunted house games: event, item, and omen. Explorers draw cards as they discover new rooms. Whenever you draw a card, read its text out loud and follow any instructions.

event card: An event card has a spiral symbol . After following its instructions, discard the card unless it says otherwise or has an ongoing effect.

item card: An item card has a bull’s head symbol . Place it face up in front of you; you now have the item in your possession. See “Use Item and Omen Cards.

omen card: An omen card has a raven symbol . Place it face up in front of you; you now have the omen in
your possession. You might have to do something immediately. At the end of your turn, if the haunt has not yet started, you must make a haunt roll. Most omens are like items.

character: Explorers, monsters, and haunt specific opponents (such as Dracula) are all characters.

character card: There are six character cards in the haunted house games, each with two different explorers (one on each side of the card). A character card shows the character’s name, portrait, traits, and other information.

companion: The Dog, Girl, and Madman omen cards are companions that follow the explorer who has custody of them. Companion omens don’t have physical or mental traits.

damage: Losing an attack, as well as many card, tile, and haunt effects, can cause an explorer to take damage. Damage can be physical or mental. For each point of damage you take, you decrease the appropriate traits or combination of traits by that many spaces on your character card.

mental damage: Knowledge and Sanity are mental traits. You divide mental damage as you choose between those two traits.

discover: When an explorer moves through a door that has no room connected to it, draw a new room tile from the stack and put it beside that door. The explorer then moves into the room and discovers it. See “Discover a New Room.

die roll: Many cards, rooms, and haunt rules require a player to attempt a die roll of X+ for his or her explorer, where “X” is a variable number. (For example, you might have to make a Knowledge roll of 4+.) There’s no limit to how many times in a turn you can roll dice, but you can’t attempt the same roll more than once per turn. Each die has 0, 1, or 2 dots on it. Roll the stated number of dice and add up all the dots; if the result is equal to or greater than the stated number, the roll succeeds. See “Attempt a Die Roll.

trait roll: These die rolls are based on one of the explorer’s (or monster’s) traits: Might, Speed, Sanity, or Knowledge. Roll as many dice as the character’s current total in that trait (not the starting value if
that trait has changed).

task roll: Some haunts require you to make a roll to succeed at a particular task (such an exorcism). You can attempt only one such roll per turn of that type of haunted house games.